About Your Host, Cotton Read 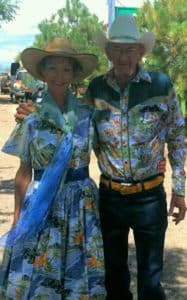 In the mid 1940’s, under the encouragement of Bob Wills, Cotton Read taught himself to play fiddle at the age of 3. He began playing professionally at the age of 5; his first appearance at the Grand Ole Oprey with Bob Wills was at the age of 9. Playing the five string Strativarus that Bob Wills gave him, (as well as a triple level steel), he played the professional circuit with Bob Wills, Hank Snow, Ernest Tubb, Marty Robbins, and Mickey Gilley. He played with Carl Smith for 4 years, 8 1/2 years with Faron Young and 8 years with Hank Thompson.

Born in Las Vegas, New Mexico, Cotton’s home was the headquarters of the Ft. Union Ranch – where the dining room seated 30, most of whom were cowboys. He’d listened to the tales and tribulations of these lone workmen at each meal.

Attending a one room schoolhouse 17 miles away through 6th grade, Cotton spent 5 hours a day on horseback getting to and from school. Through the influence of the cowboys on the Ranch, many of whom were musicians themselves as well as the encouragement of Bob Wills, Cotton spent much of his hours on horseback practicing his fiddle and creating melodies and lyrics to songs. Listening to the anecdotes and the perspective of these older cowboys, Cotton’s lyrics are remarkably precocious. During these young years, he wrote over 500 songs, 14 of which went #1 in the ‘50’s.

I Overlooked an Orchid was one of his first, going #1 on the charts with Carl Smith for 66 weeks. The Wild Side of Life was #1 for 65 weeks, Live Fast, Love Hard, Die Young was #1 for 73 weeks, Four in the Morning and Hellow Walls, (both written with Willie Nelson) were in the top ten for a year. Live Fast, Love Hard, Die Young was written by Cotton specifically about Faron Young. Cotton wrote the lyrics as a specific assessment of Faron’s life style. It was one of Faron’s favorites. Four in the Morning was written while Cotton was doing a gig in Nashville with Faron. Telling Cotton to meet him at Tootsie’s sometime after midnight when they were to leave for their next gig, Faron didn’t show. Hours after the agreed time, sometime around 4 in the morning, Cotton and Willie Nelson, a veteran songwriter himself created the song that night. Another time when Cotton and Faron were in Nashville, Faron had gone through a falling out with some female and was terribly depressed. Cotton witnessed him spending days on end inside his hotel room – never coming out. With not even a guitar to entertain himself, no TV, – Cotton’s description of imagining Faron talking to the walls was the idea that turned into the song, Hellow Walls. Cotton wrote it at Tootsie’s with Willie Nelson. Regarding the original Faron Young LP album cover featuring Hellow Walls as a feature song, I asked Cotton why Hellow was spelled with a “w” and he said he thought that was how you spelled Hello — which makes perfect sense when you realize that Cotton was never given a spelling test in all his years of having the same teacher at the one room schoolhouse.

Other songs Cotton wrote the music and lyrics to: Pop a Top, A Six Pack to Go, I’ve Got a Humpty Dumpty Heart, Whoa Sailor, Honky Tonk Girl, I’ve Got $5 and It’s Saturday Night, Blackboard of My Heart, All Right, A Place for Girls Like You, I Miss You Already, Yesterday’s Girl, Drivin’ Nails in My Coffin, Squaws Along the Yukon, A Satisfied Mind, If You Ain’t Lovin’ You Ain’t Livin’, Just Married, Tear Drops for Pennies, It’s a Lovely, Lovely World, Are you Teasing Me?, Just Wait ‘til I Get You Alone, Dog Gone it Baby I’m in Love, You’re Are the One, Alone With You, Sweet Dreams of You, (originally recorded by Faron and later recorded by Patsy Cline), Country Girl, Yellow Bandana, There Stands the Glass, Waltz Crazy Woman, Wine Me Up, I Love You Because, (When you Feel Like You’re in Love) Don’t Just Stand There, Breakin’ the Rules, Going Steady, Hangover Tavern, How Cold Hearted Can You Get, I Love you a 1000 Ways, I Wasted a Nickel, All Right, Breaking the Rules, Cotton is playing fiddle and/or steel in each one of the original recordings of the above songs. Bouncing back and forth, Cotton toured with Hank Thompson and Faron Young for 8 1/2 years which is why the majority of his hit songs were recorded by Hank Thompson and Faron Young. It is fair to say that roughly 1/3 of Hank’s hits and 1/3 of Faron’s hits were written by Cotton. Faron was good about paying Cotton royalties for these songs when they were first recorded. Hank Thompson was not.

Cotton recorded extensively in Nashville for 30 years. His 5 string fiddle and his triple level steel (each level had 10 strings) both contributed an unmistakable, unique sound to the country music recordings of the 50’s and 60’s. Before the age of diodes and synthesizers, he was employed regularly by the quality-minded sound technicians of Sun Records, Capital Records, Mercury Records, Victor, Castle, Columbia and Decca. Back then, the sound technicians had a vested interest in the quality of the recording because their salary was often part of the take. Because Cotton was the top requested fiddle and steel player of the Nashville recording studios; because of this impressive resume, the Grand Old Oprey employed Cotton as their ” house ” fiddle player for 27 years. Cotton was paid $1,000/hr.

Cotton sung and played the fiddle in the original 1953 Cotton Eyed Joe recording with Isaac Peyton Sweat. Cotton choreographed the dance that accompanies the Cotton Eyed Joe song because, to entertain the crowds, he often danced and played fiddle out on the floor simultaneously.

Cotton’s skill as a fiddle player is perhaps best demonstrated in the Urban Cowboy’s soundtrack: the Orange Blossom Special. Cotton, (not John Travolta) did most of the dancing in Urban Cowboy. Although most of the dancing is gone in the current shortened versions of the movie, it is Cotton doing all of the intricate foot work. The movie was shot at Gilley’s at which time Cotton was part owner. He was asked to dance in the movie because, as a country western dancer, he had won the title – International Grand Champion 9 times.

A near mortal accident in 1985 terminated Cotton Read’s musical career. Cotton has taught Country Dancing in the Four Corners area for over 2 decades. He taught locally at The Anasazi in Cortez, The Sundowner, The Sundance Saloon, Horny’s and Scoot ‘n Blues in Durango as well as The Office, the Top Deck and The Palace in Farmington. He taught extensively at Gilley’s during the Urban Cowboy craze. At the request of Tom Landry, Cotton taught Country Dancing to the Dallas Cowboy Football team.

Dawn regards herself as a street dancer having acquired her skills in the trenches. She considers herself lucky to have learned West Coast Swing from the talents of the old school; from men who understand its subtle innuendos since its origins on the West Coast in the 40’s.

Dawn has written and researched the History Stories on this website – stories that focus on Durango during the 1880’s.

Calll 970-247-5199 or fill out the form below to inquire about availability and details.